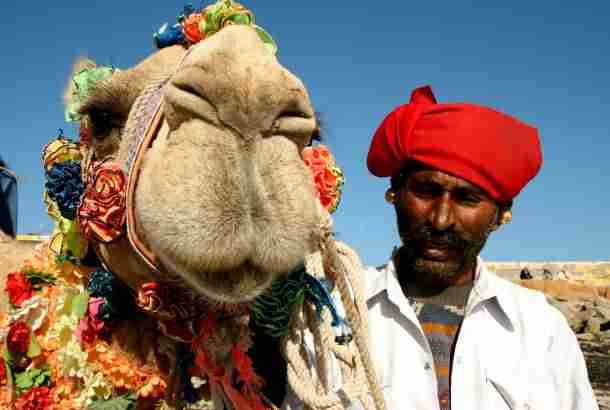 As the weather is more likely to be warm, bright, and dry, the best time to visit India is between October and March. The north offers crystal-clear blue skies between this period of time.
April and May are fantastic months to travel. But because of the rising temperatures you can experience excessive humidity.
The best time to travel to Ladakh, which is in the far north, is between June and September. When the rest of the country is experiencing monsoon season.
The monsoon season has ended by November, so it’s the ideal time to travel to India’s southern states.

The cool, dry season, which runs from December through to March, is typically the best time to visit India. But, keep in mind that India is a big country with a diverse climate and a range of weather conditions. The majority of the nation enjoys bright, warm sunshine during the first few months of the year.

Seasons and Weather of India

Basically, the weather of India can be divided into three seasons –

Summer:  Summer Seasons in India lies from March to June. June and July are very hot and humid especially.

Monsoon: The rainy season lasts from June to September. The Indian Monsoon turns large parts of India from a kind of semi-desert into green lands.

The coolest and driest time of the year to visit is between October and February. It is also regarded as the winter season and seen by many as the best time to visit India. During this time weather is dry, making the ideal conditions to visit hidden gems of India. Temperatures will always be warmer in the south, with comfortable coastal beach weather.
The greatest time to travel to India is from November until the beginning of March. Because it is also the peak tourist season in India.
It can be quite busy in popular tourist locations like Rajasthan, Agra, Goa, and Kerala. Goa is overrun with domestic tourists around Christmas and New Year’s. 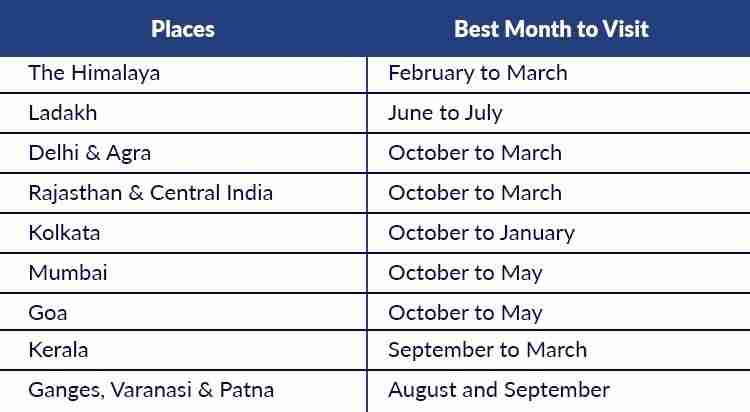 When Is Tourist Season?

When is the best time to book flights:

The tourist season ranges from November to the beginning of March. This is when India faces the average temperature in South, Central and the flat parts of North India. It is really cold weather with snow in inaccessible regions of the North.

It is the time when you can get cheap flight tickets and hotels. So, book your tickets at least 3 months in advance if you plan your holiday during this time.

The best destination to visit in December:

In India, the main tourist destinations are Rajasthan, Agra, Goa, and Kerala. During Christmas and New Year, a lot of tourists come to these regions to get around.

When is the best time to visit the Indian Himalaya?

November through February are the ideal times to travel the entire Indian Himalaya. Although January and February are cold at higher altitudes, this is the driest time of year. The summer monsoon in the eastern Himalaya produces rainfall in the summer (June-August). And, to a lesser extent, in the shoulder seasons, especially in cities like Gangtok. In the summer, it is advised to stay away from this region, which includes Darjeeling.

When is the best time to visit Delhi?

Delhi has a subtropical climate. With a moderate, sunny winter, an hot early summer, and a wet, humid monsoon season in the late summer. Delhi is best visited between November and February. Avoid visiting between July to September, If you want to avoid the monsoon season rains. The Taj Mahal is located in Agra, which has a similar climate.

When is the best time to visit Goa?

Goa is renowned for its beaches and laid-back atmosphere. The monsoon produces heavy rains starting in late May and lasting until September. January and February are the best months to travel to Goa. Because the weather is still warm (average greatest 32°C/90°F) and sunny. Although still in the dry season, March, April, and November can get rather warm and have a chance of cyclones.

When is the best time to visit Kerala?

At the very southern tip of Kerala, at Thiruvananthapuram (formerly Trivandrum). The rains are less severe but last longer, lasting from April to the end of November. Kerala’s high season, which is usually dry and mildly warm, lasts from late November to late March.

When is the best time to visit Rajasthan?

The best months to visit Rajasthan, which is home to Jaipur are December, January, and February. However, if you are travelling through India at a different time of year. The monsoon has less of an influence than it does in other areas, so it’s not a bad place to visit.

When is the best time to visit Varanasi?

Varanasi is most pleasant to visit from November to early March, after which the heat rises. The months of July and August are when the moon rises, and the months of April, May, and June are the hottest.